The word extension understates the transformation to this property. It has been designed by Jeremy King a local award-winning architect to meet the client’s exacting requirements. The finishes are immaculate in their design and careful consideration was given to getting enough natural light through the extension into the existing areas of the property. It is worthy of mention that this was achieved and the complete ground floor is indeed flooded with natural light.

The new space provides an open plan living on a grand scale with a lounge/dining/kitchen area and separate utility room. To achieve the level of finish required by the designer has been a real challenge to all the team at PA Hollingworth & Co, but achieve it we have.

We must make mention of the high standard of work carried out by the staff at PAH and thank all of them for their dedication and patience needed to achieve such a fantastic finished project.

Quantity Surveyor – “A superior project you would expect to see in a London property”
Architect – “London Road, looking stunning, thanks to PA Hollingworth & Co”
Client – “We are incredibly happy with the quality and workmanship that you guys have delivered and on budget.”

More information about Jeremy King Architects can be found on their website.

To turn this building, which had been used in various guises, into a modern well-appointed family home fit for 21st century living, yet retaining its history and character.

Strangely this property remains unlisted, however, it is steeped in history and has played a part in the life of Deal’s conservation area for around 200 years as a hotel, public house (The Redan), as a scouting venue and various retail ventures such as antique furniture. Needless to say the property had become extremely disjointed and unkempt and the new owners have had a scheme designed to turn the building into a home with large open plan ground floor living space. Relocation and new designed central stair case. 1st floor consisting 3 bedrooms all with en-suite facilities and 1 with a dressing room. 2nd Floor consisting of 3 further bedrooms with a large bathroom.

To achieve this the property is to be extensively re configured, removal of many internal walls, replacement of many floors, removal of a rear annex and re construction over 2 levels to the rear of the property including a new balcony servicing the rear bedroom. The roof is to be stripped, altered and repaired to create the needed rooms on the 2nd floor and the original Kent peg tiles replaced to retain the character of the building. Damp treatments, replacement windows and doors to name but a few of the other tasks to be carried out along with the internal fit-out of the kitchen and full electrical, heating and domestic water installation.

The project is expected to be completed by late August 2017 and whilst the exterior of the building will be fully restored, visually little should change. Whilst internally, the property will become a modern home with all the comforts expected today, whilst the history and character are to remain.

January 2017
The project is on-going having commenced in mid-November 2016 and to date we have completed the site set-up and scaffold. The soft strip out of the property, exposing the structure for inspection and repair. Carried out all the demolition of the annex and internal walls and installation of steel supports as required.

Underpinning of the existing foundations, excavations completed ready to form the new ground floor and part re-construction of the new rear external wall of the property.

April 2017
The ongoing refurbishment of the historical 102 Middle Street has made steady progress over the last 5 months.

The most notable development has been the repair and alteration of the property’s roof structure. 102 Middle Street was previously two separate properties, one being the 19th Century public house “The Redan”, resulting in the two rooves never properly aligning. This refurbishment has provided an opportunity for this to be remedied and PAH has worked closely with the architect, engineer and client to deliver a solution that will be in place for the next 300 years.

The client has been keen to retain as many original features and structures as possible. With this in mind, a repair and alteration of the existing roof was preferred to a renewal. The engineer, Christopher Hore, developed an intelligent roof plan whereby every other collar was removed whilst retaining strength. This allowed the ceiling in the upstairs bedrooms to be vaulted, creating a spacious and light feel, something greatly appreciated by the Client. In addition to this, PAH put in place plans for the future easy and safe maintenance of the building. Access to the roof has been installed, along with a ManSafe system which allows a user to attach a harness for safe maintenance of the roof. 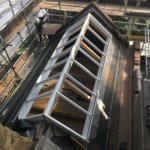 Pitched roof light installed above the kitchen floods the room with light and heightens the room.

External walls in a building of this age are often challenging due to their propensity to take on and retain water. PAH have overcome the dampness in the external walls by installing independent stud work throughout, creating an insulated cavity between external and internal walls. 11mm OSB was installed over the timber stud work, followed by plasterboard and a 3mm plaster skim. The advantage offered by this method is that a fixing can be placed in any point in every wall in the house, a feature welcomed by the client. 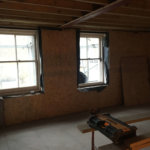 Timber stud walls, insulated with Celotex insulation and boarded with OSB eliminates transfer of damp from the external walls. 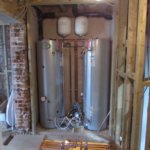 Due to the large size, it was vital that a sufficient heating system was installed at 102 Middle Street. Our partners, Advent Green, fitted two 250 litre hot water cylinders in the property that will service all domestic hot water for the entire property. 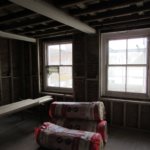 Deal’s maritime history can be seen throughout 102 Middle Street. Pitch pine beams, once used in ship building, are present in the ground floor rooms. Client and architect were both in agreement that this history be retained in the home. PAH were able to strengthen the beams, whilst keeping them on display meaning they now serve both a practical and aesthetic purpose.

PAH continues to liaise with client, architect and engineer on a twice monthly basis with all four parties maintaining an excellent working relationship, a vital aspect to any project.

Feedback from the Architect

I was first approached by Gerald Bland in Spring of 2015 with the design work starting in June of that year. The building had a chequered past and had been much altered over the previous 200 years with parts dating from the 18th Century. It has been a public house, a hotel, an auction house and an antique shop. At the start of the project it was configured as a shop on the ground floor with a flat on the first & second floors. At the back of the ground floor there was an area which was originally built as a small assembly hall, attached to the hotel. The building had been extensively altered and extended over the course of its life with a complete new, front façade applied to the older building in the latter half of the 19th Century. The original stair position had been lost with the stair from ground to first located at the rear of the plan, with the access from first to second floor at the front. The interior, including the services and all the facilities and fittings had not been altered for many years. The property is not listed as a heritage asset but is in the Middle Street conservation area with the façade to Middle Street being subject to additional controls.

The brief was to create a family house out of the confused, dated and much altered property. Early in the design process the creation of a new stair, serving all floors was agreed with an extension at roof level, filling in a valley between existing pitched roofs, enabling a connection to the second floor. Later extensions at the rear were removed to allow more light into the plan and to create a direct connection to the garden from the new kitchen which was formed out of the former assembly hall. New rooms were created out of the open plan at ground floor to provide a study looking onto Middle Street, a Utility with a new service entrance form a side passage and a cloakroom/WC. A second entrance door which led to one of the bar’s was removed and a new window inserted to match others on this elevation.

The top floor rooms had a very low ceiling height and along with repairing and strengthening the main roof the front rooms were vaulted to the ridge and ceiling heights improved elsewhere. A new bathroom was created out a former roof space at second floor and new en-suite bathrooms provided to the bedrooms at first floor. At the rear a balcony has been provided to the rear bedroom. Generally the building has all new services and a considerable amount of insulation was installed. There were many structural repairs and replacement windows throughout.

It has been very satisfying to work with Gerald & Mary Bland on their house and to work with Sally Dernie, on the interior design and Coral Bailey on the garden design. The contract administration was by PMC Surveyors of Dover. Working with P A Hollingworth to realise what was a very challenging design was a thoroughly positive experience and I congratulate them on completing a an excellent project.