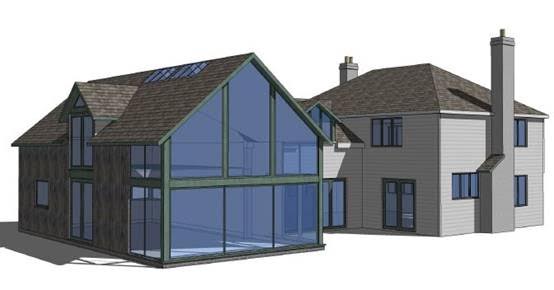 To provide a modern family home with good sized rooms and a contemporary living space.

Dunkirk, between Faversham and Canterbury, Kent

This building was originally a barn structure on a farm. At some point in its history, it was converted to a dwelling but the work was not carried out to a very high standard and some of the original barn structure was never uplifted during the transition. Hence some basic structural works have had to be carried out to the existing building such as underpinning of foundations and uplift and repair of the original roof to meet modern construction codes.

The building is of brick construction under a slate roof and the 1st floor is clad in oak ship-lap. Although remaining the same, as previously stated there have been many improvements to the existing structure. In addition to this, we are adding a very contemporary steel framed 2 storey extension and a new two-storey front entrance porch. Both are to be clad to match the existing but the extension also provides 360-degree views of the surrounding garden and countryside over 2 floors.

This should be a stunning project when complete which is due in May 2019.

Project completed 2 weeks into June 2019 (2 weeks late) following some additional requirements by the clients. Design team delighted with the standard of workmanship and project management. The client was also extremely complimentary about the way in which the whole company performed and the finished project. In particular, they paid tribute to the staff of all trades who worked on the project and the management team for their unwavering efforts to keep the project on time.

P A Hollingworth & Co Ltd were contracted to provide replacement of an existing garage building which probably dated back to the age of coaching.  The design was to leave the old garage walls to shield a very contemporary 2 storey, self contained, hobby room/kitchen, bathroom, lounge area, mezzanine floor with bedroom and ensuite and a courtyard.  The building needed to have END_OF_DOCUMENT_TOKEN_TO_BE_REPLACED